When I finished my photoshoot as the warm winter sun descended behind the stark industrial buildings, the last thing I expected was to be handed the keys to a Nissan R35 GTR...

My journey began when I recently ventured over to Road and Track Australia to check out the large variety of cars which were on display in their enormous, state of the art workshop. Road and Track is Sydney’s premier Ferrari, Maserati & Lamborghini independent specialists and their technicians who are not only car enthusiasts themselves, but are also extensively experienced with Japanese brands such as, Mitsubishi, Nissan and Honda.

As I made my way into the complex I was instantly shocked at just how many cars there were inside and the diversity. To my right I discovered an immaculate 25th Anniversary Lamborghini Countach, parked next to a stunning Porsche GT2 997 and to my left I was greeted with a white Lamborghini Gallardo. In the mix was also a clean RX7, a modified Ferrari 360 Modena, a 2015 Shelby GT500, a 2006 Bentley Continental GT, and a 2014 Ariel Atom 3.5R just to name a few. As I passed the service area and walked up the stairs to the main office, I turned around to check out the view and thought, this must be heaven. Even better was entering the office and seeing that there was a huge glass opening which overlooked the cars below. 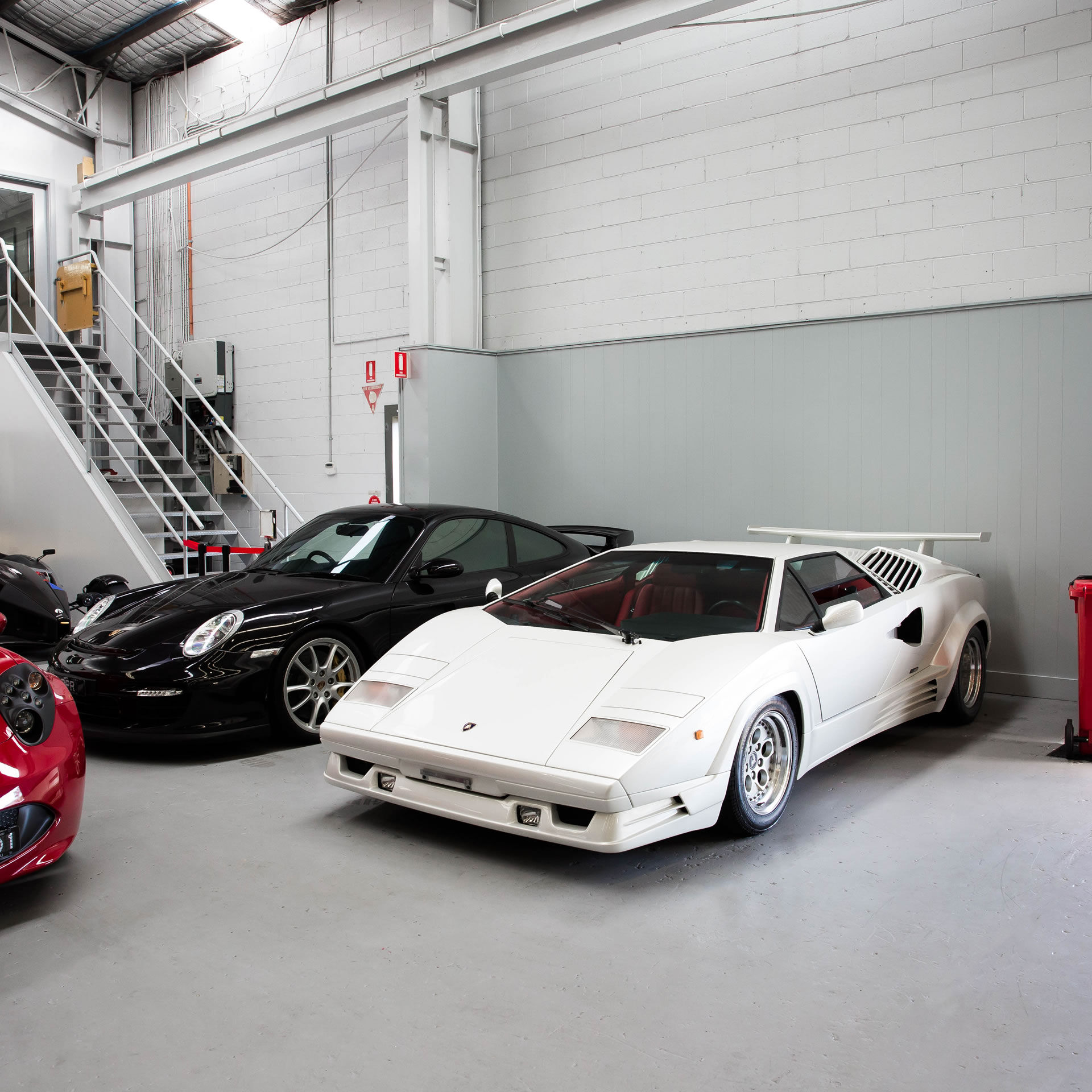 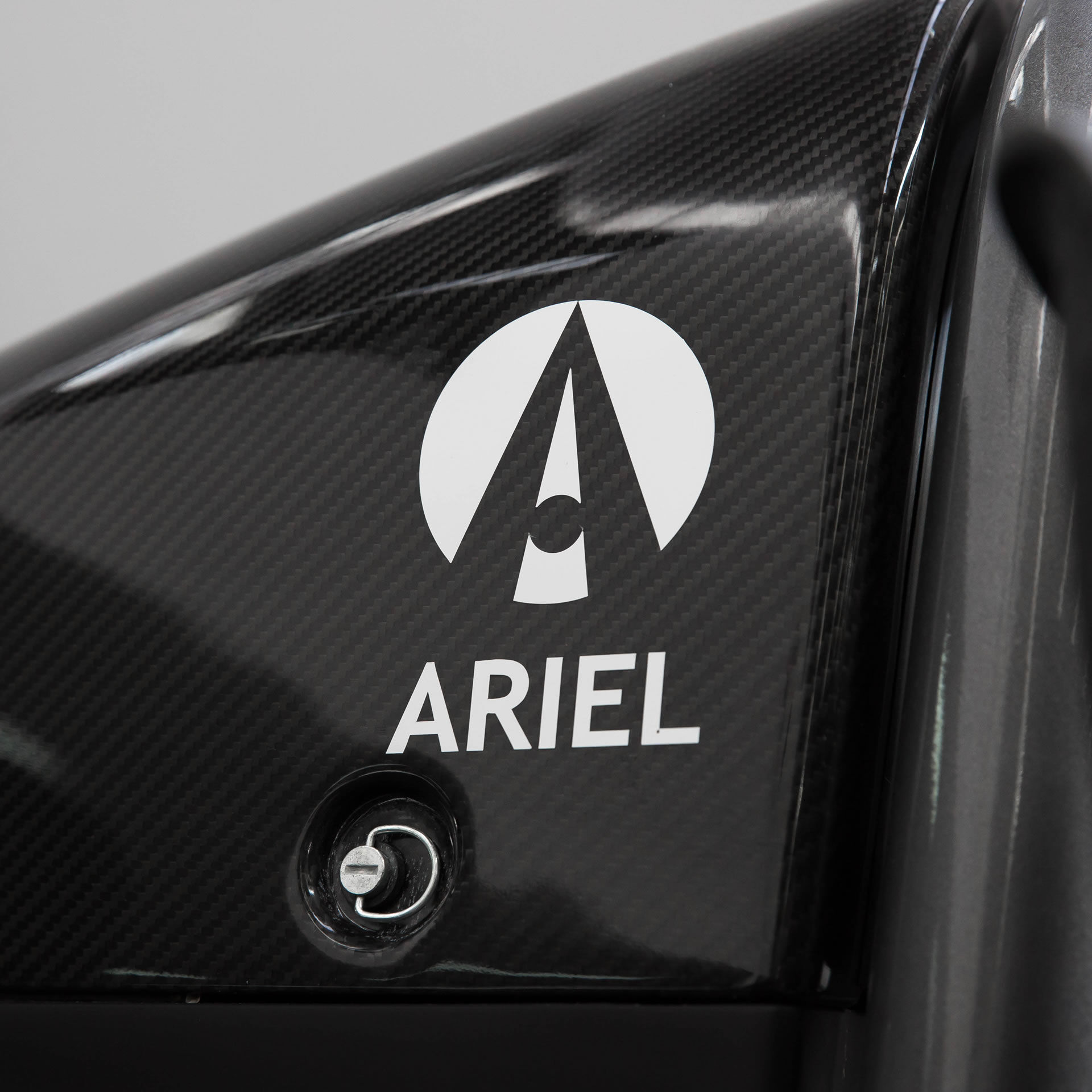 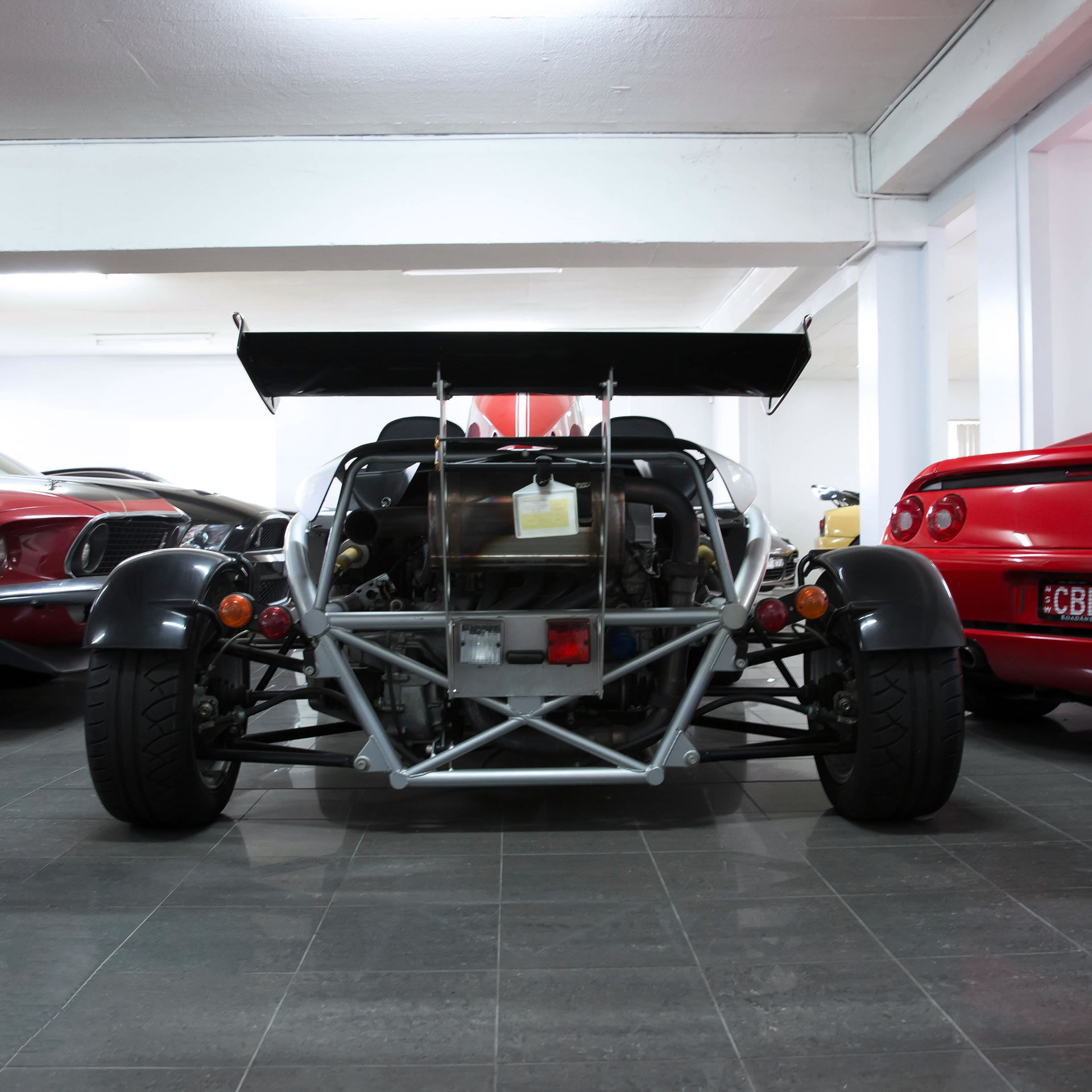 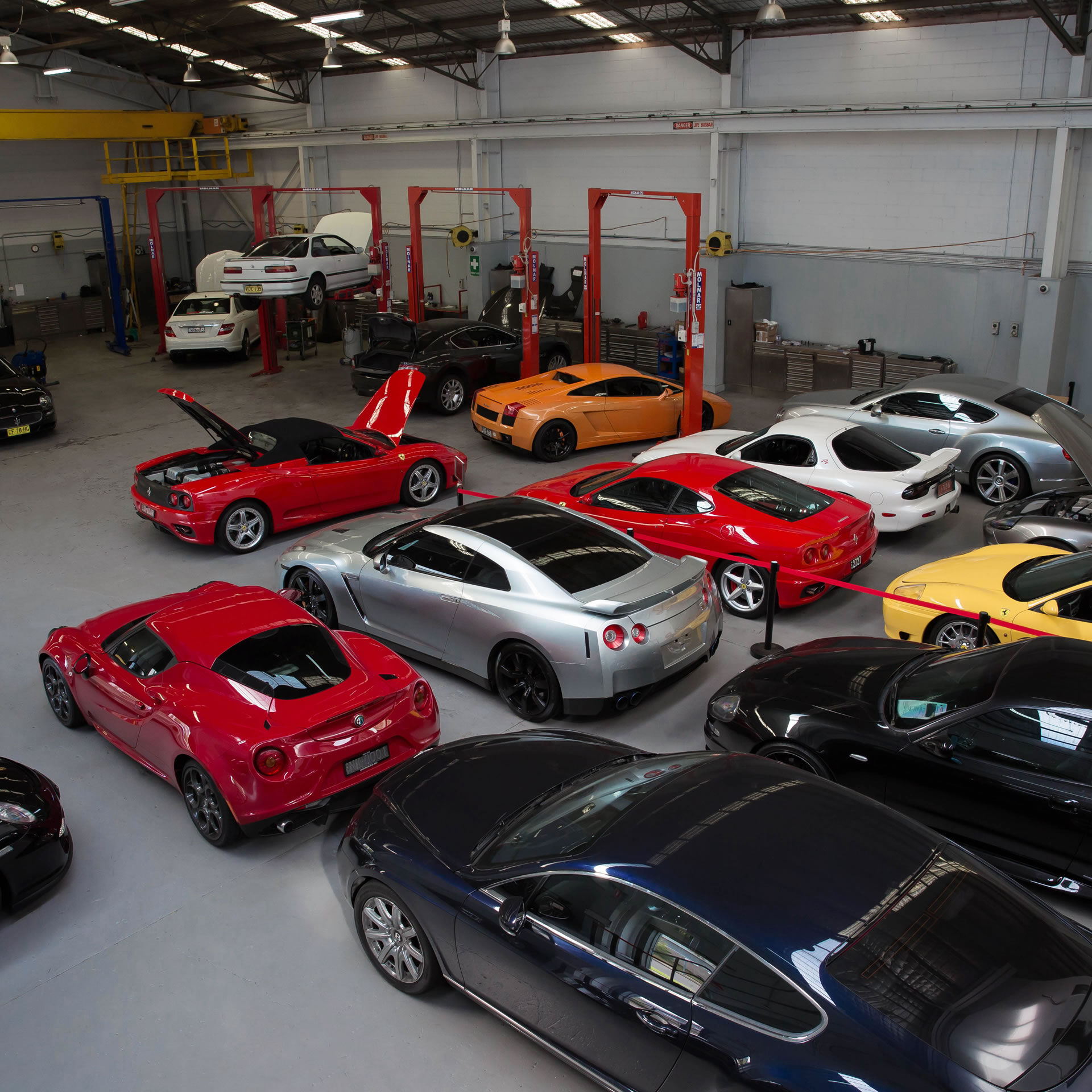 After appreciating the view, I took a seat and waited to meet with Ross and Kat to discuss some up coming projects for Road and Track. After chatting over a glass of water (everyone is always shocked when I mention I've never had coffee before), Ross mentioned that they had a white 2010 Nissan R35 GTR available in the upcoming week and were needing some photographs taken. So without hesitation, I suggested we pair it with my black 2000 Nissan R34 GTT for a ying and yang, GTT meets GTR type of shoot. 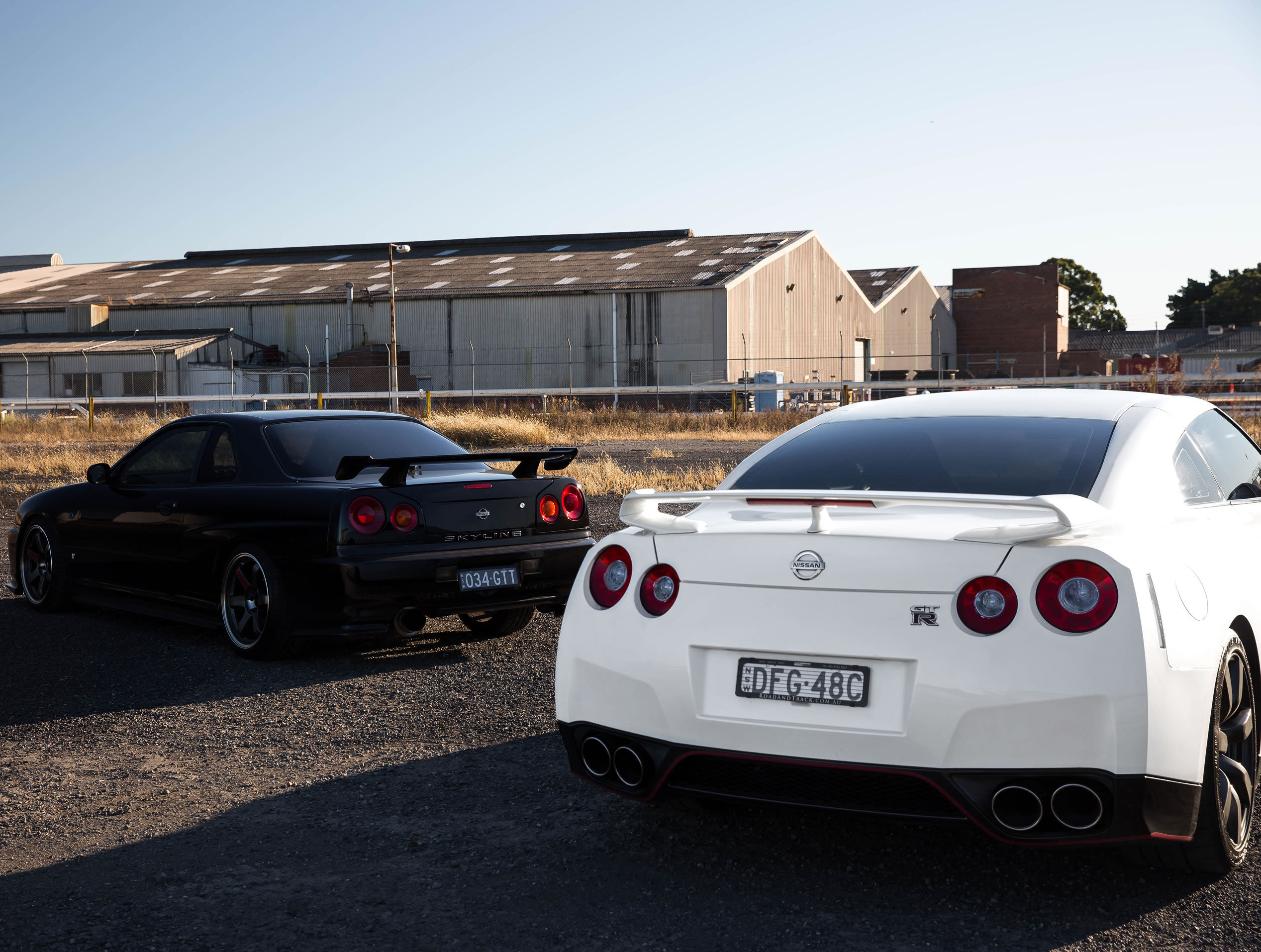 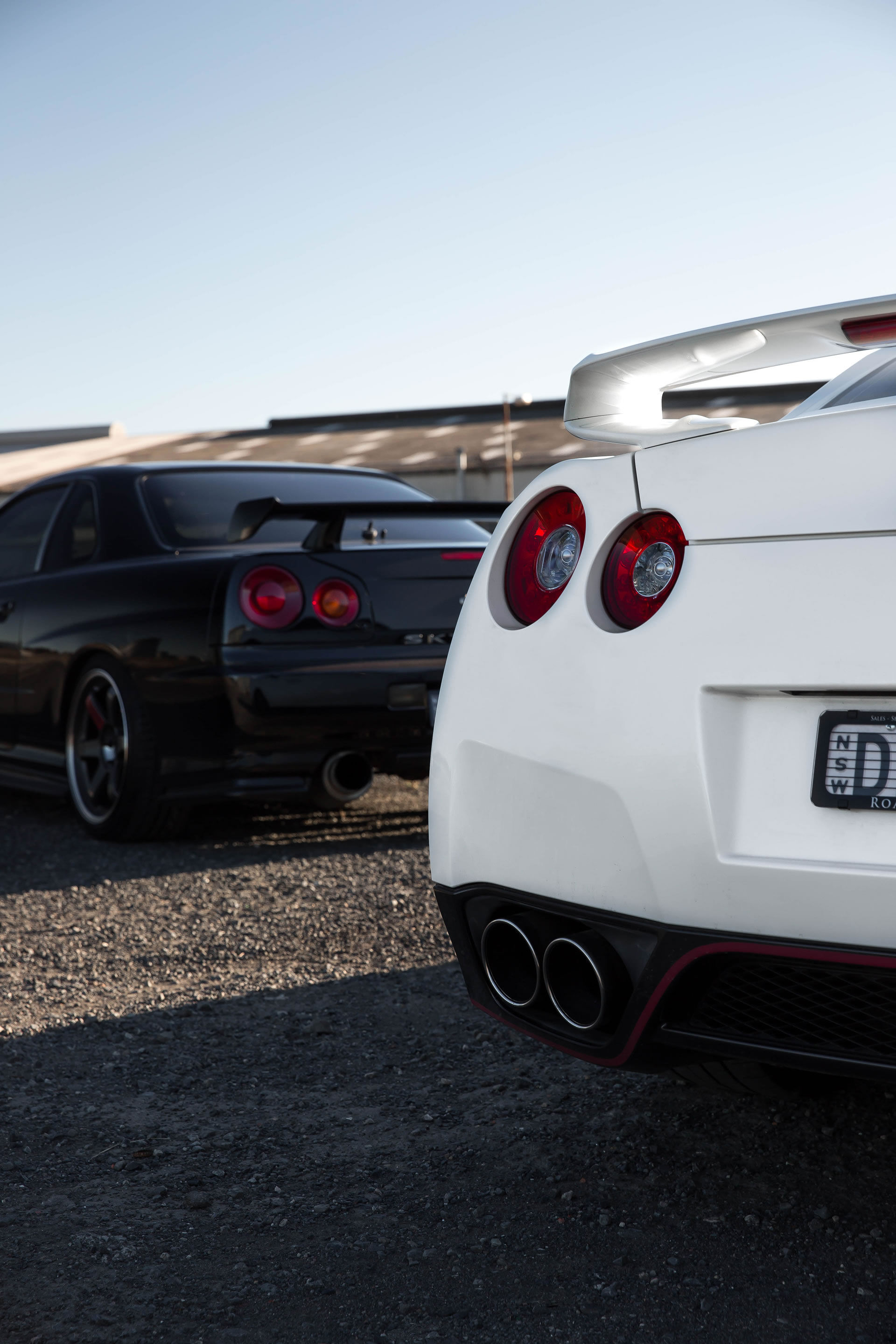 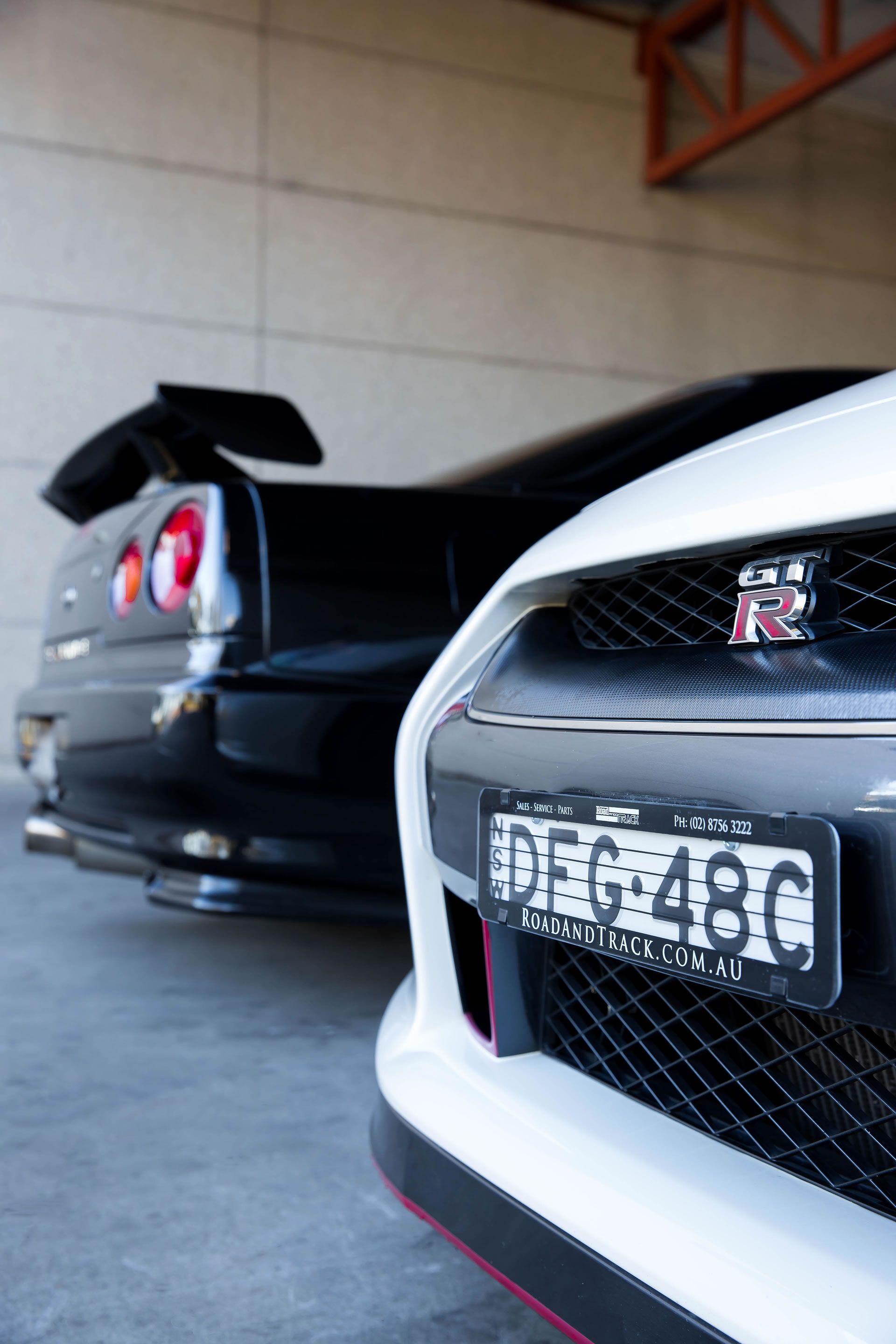 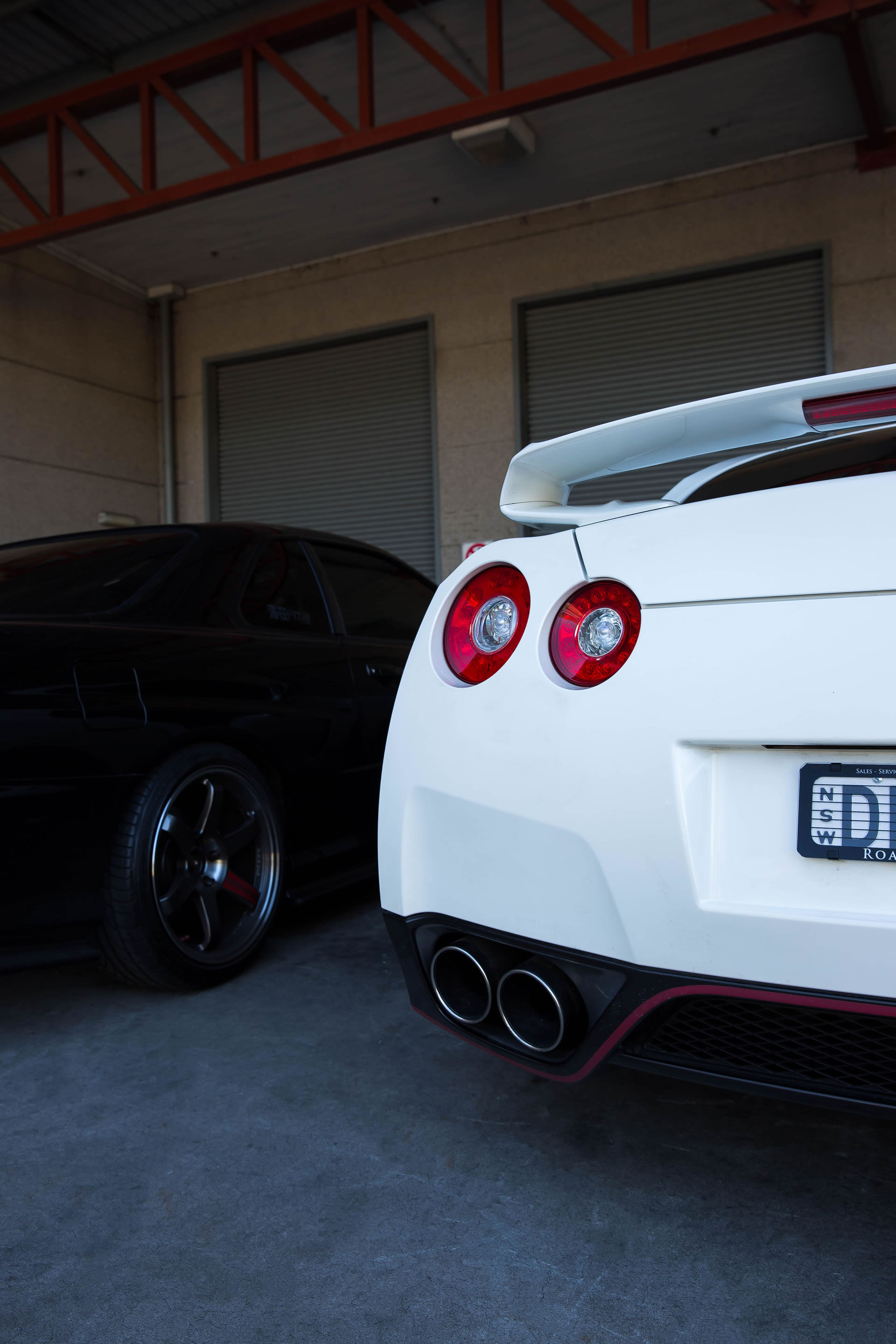 There is no doubt that the GTR is an automotive icon and at the top of many enthusiasts wish lists. This was certainly the case for me so you could only imagine how excited I was to have the opportunity to take photos of it.

The week leading up to the proposed photoshoot, I began to visualise about how I wanted it to turn out and where I wanted it to take place. One of my favourite places to shoot is in an empty industrial area with raw materials in the backdrop, and I had one place in mind that the two cars would fit perfectly in.

The time finally arrived to meet up with Ross at the Road and Track HQ. A quick exchange of words and a "follow me" gesture signaled it was time to drive so we hopped in our cars and made our way to the industrial park. Seeing the GTR from my rearview mirror was a sight I hadn't seen before and the presence that the GTR evokes is unlike no other. I had to remember to keep my eyes on the road ahead and to stop drooling at what was behind me. 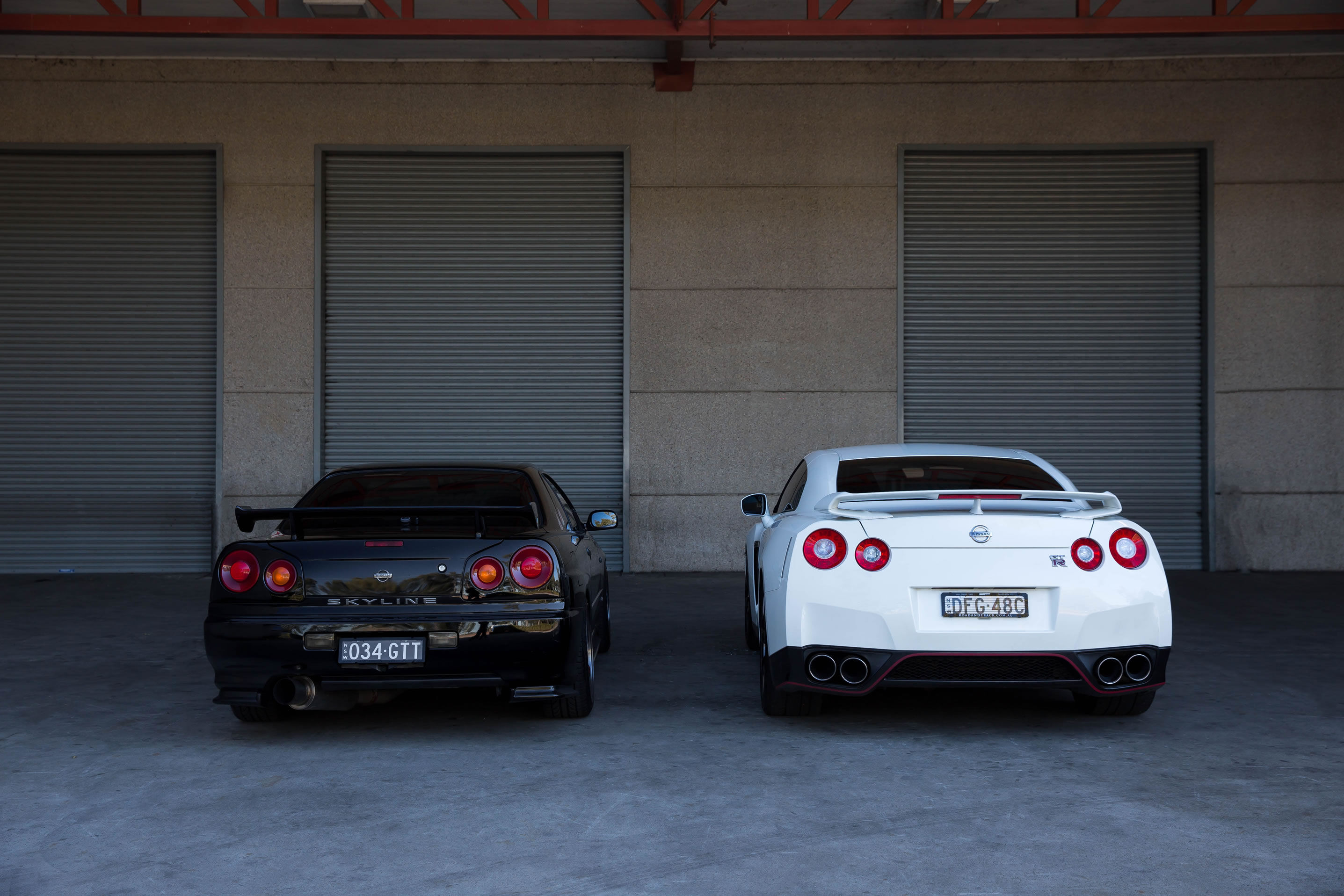 For the initial round of photos, I parked my car beside the GTR and thought, this is a sight I could never get tired of. Upon first glance you're instantly aware as to just how much bigger the beast of the GTR really is, making my car seem somewhat miniscule.

The pearl white machine with black and red accents looked incredible and complemented the rawness of the location nicely. There is something about the iconic rear ends that never seems to get old, but even when it does, it's design is timeless and is stunning in all variations. 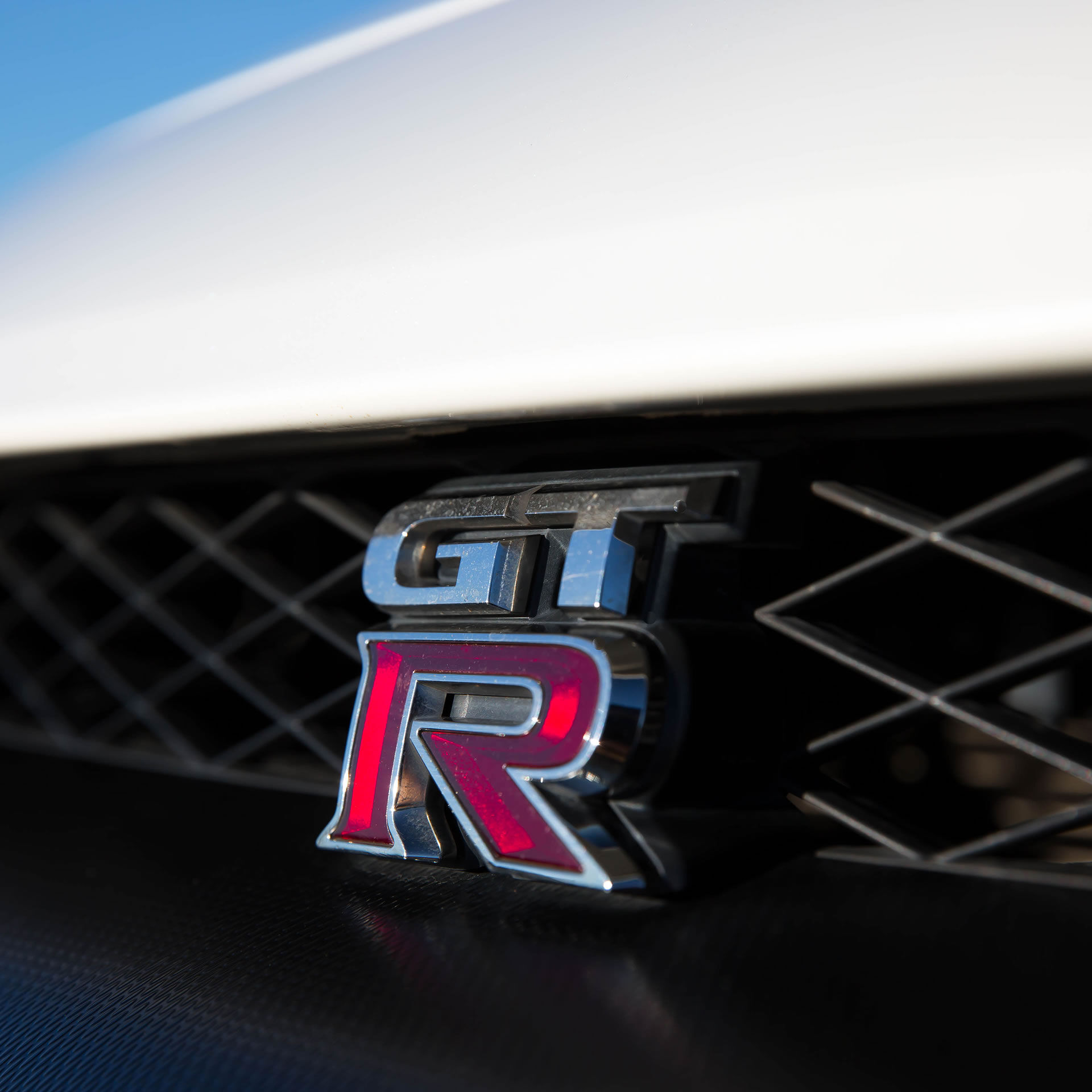 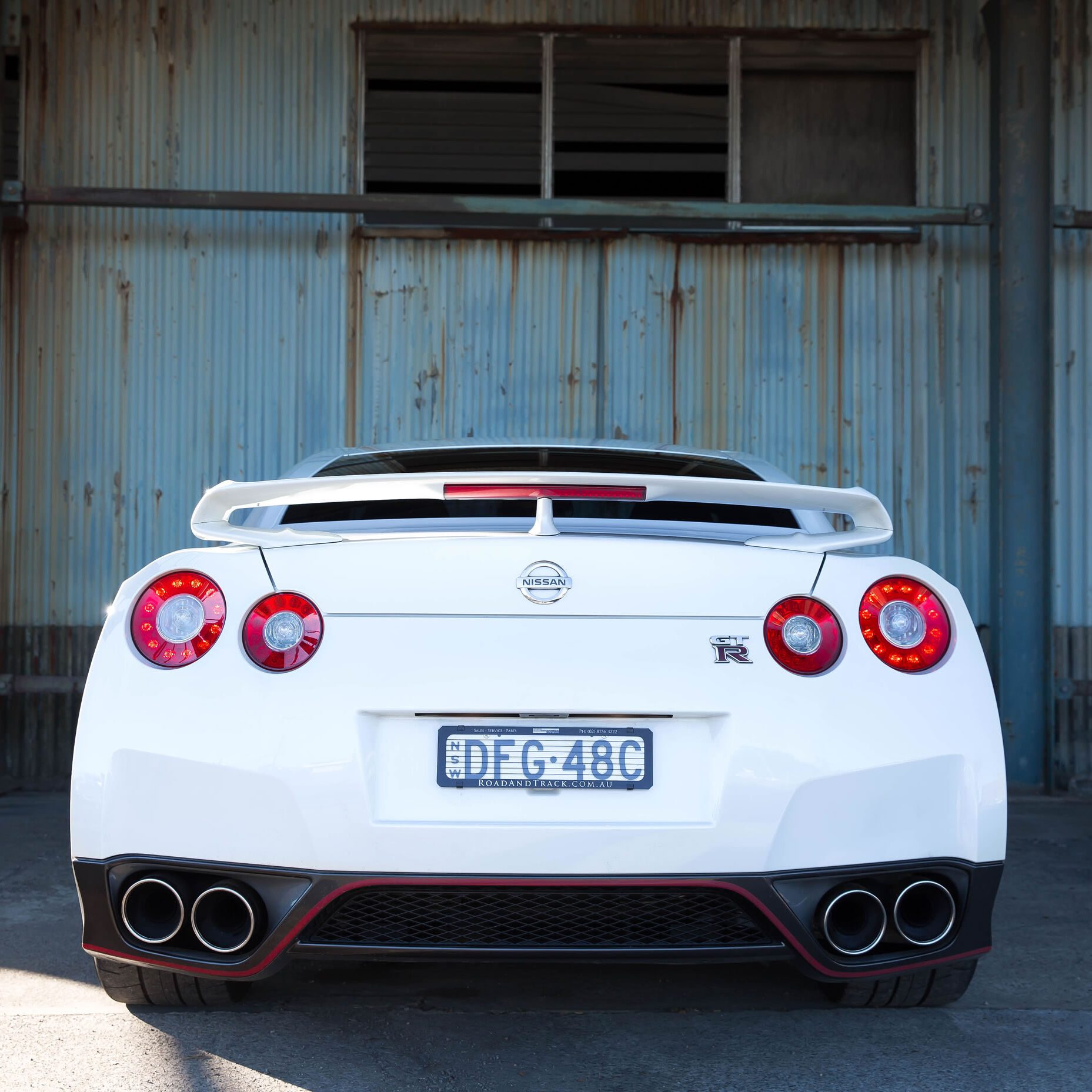 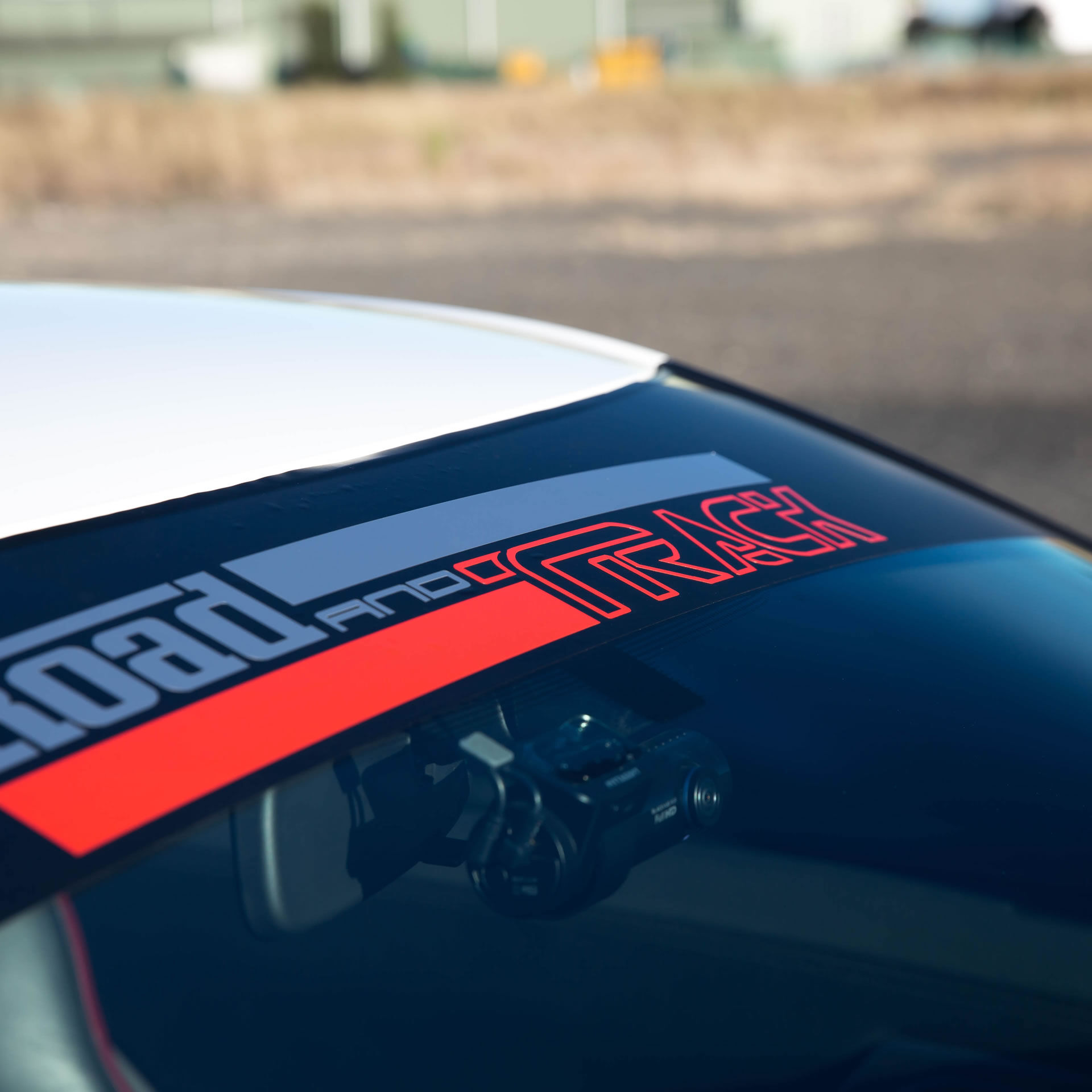 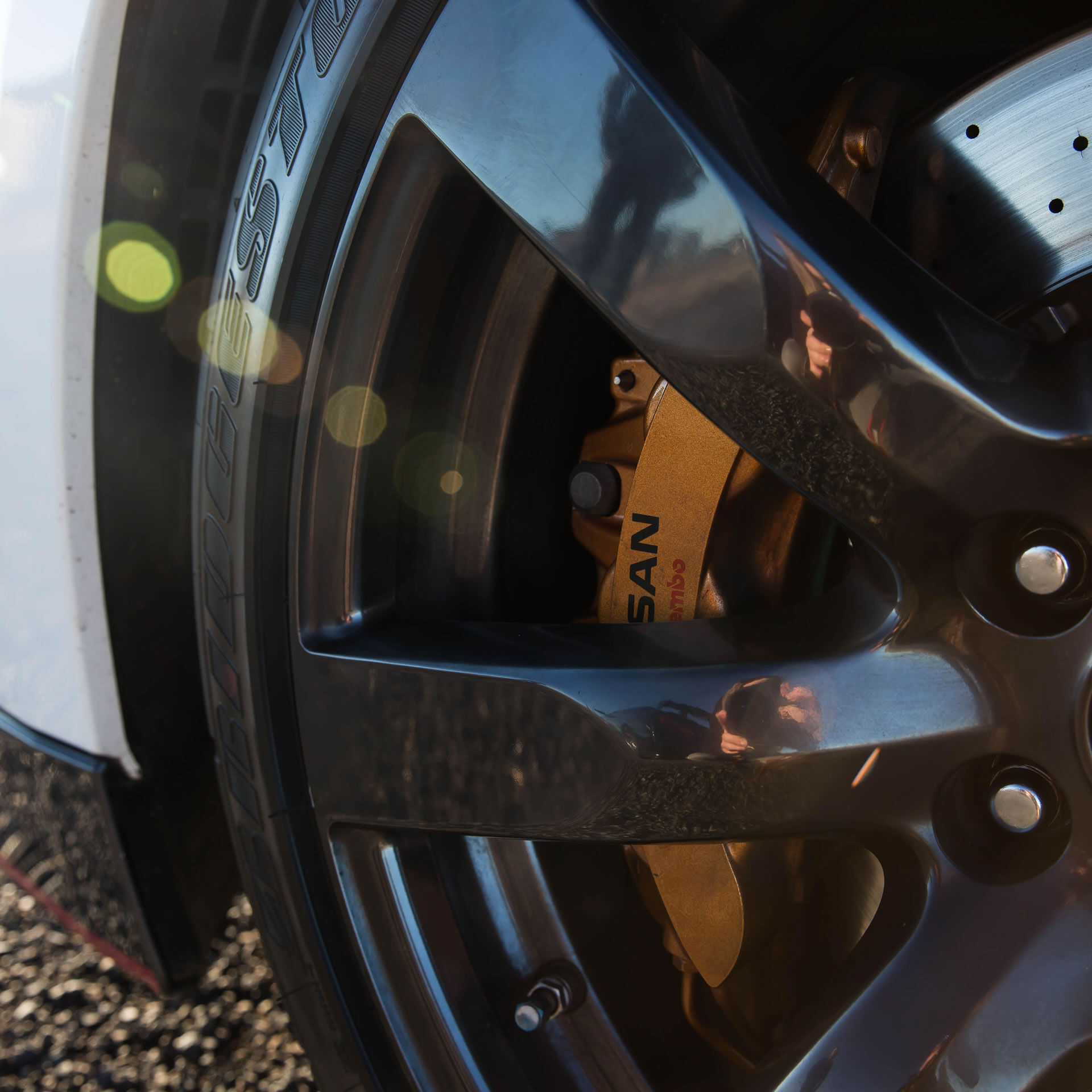 One thing that is undeniable is the GTR's empathetic focus on performance, composure and agility. The 2010 GTR comes from the factory with lightweight 20-inch alloy wheels, and an incredible Brembo brake system, which uses cross drilled, two piece 15-inch floating rotors, with 6-piston calipers up front, and 4-piston calipers in the rear. When you're driving at speed, and suddenly slam on the brakes, these Brembos will stop you so fast, you'll probably feel like your teeth will fall out of your mouth. 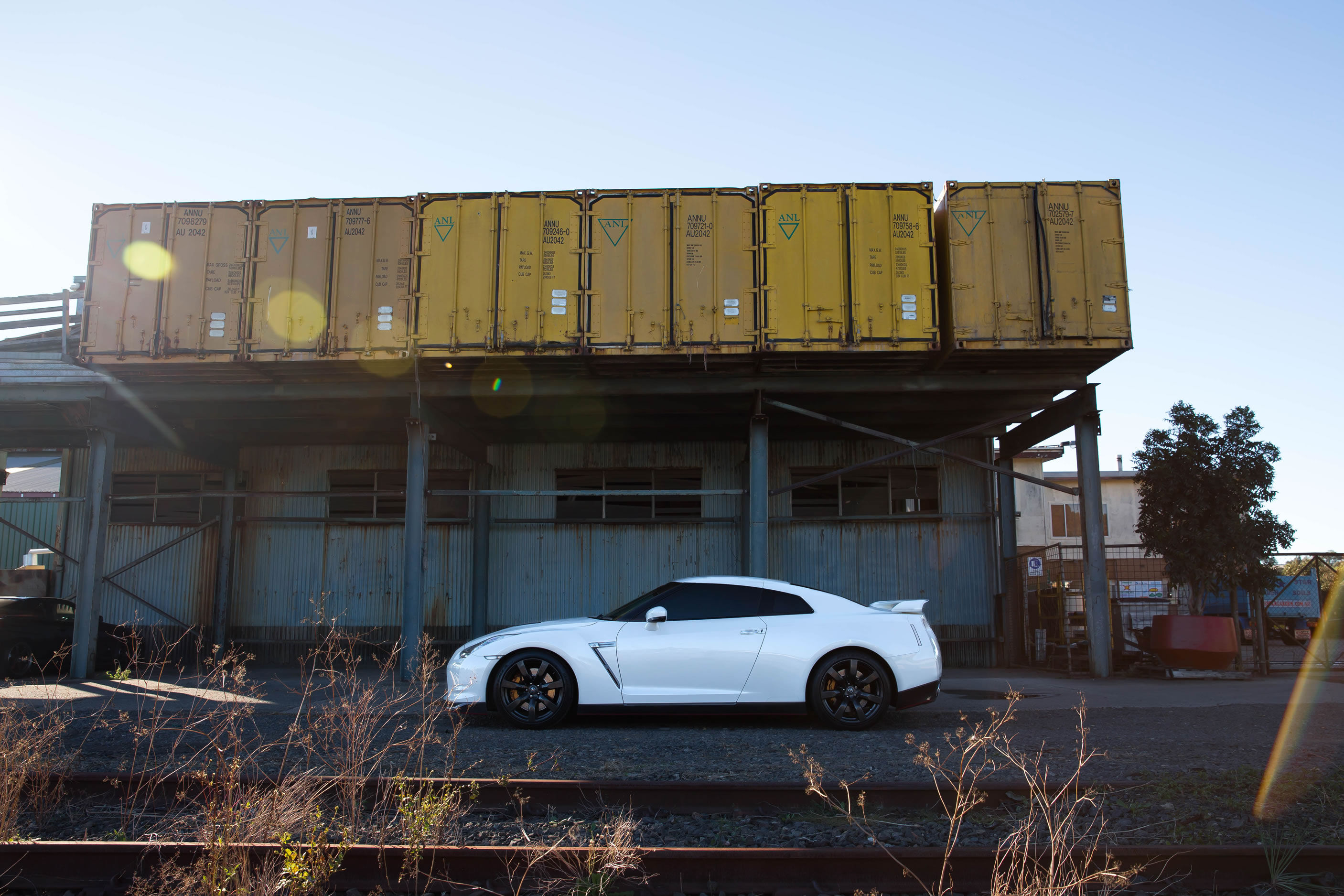 The next location saw us parking the Nissan's parallel to some unused train tracks and shipping containers. It was as if they had just landed from Japan. Both of the cars looked so aggressive and I love the contrasting black lower bodywork that the R35's have. It makes the whole car look more streamline, and ridiculously attractive. Having the cars situated by the tracks made me want to hop in, get behind the wheel and head straight to the race track. 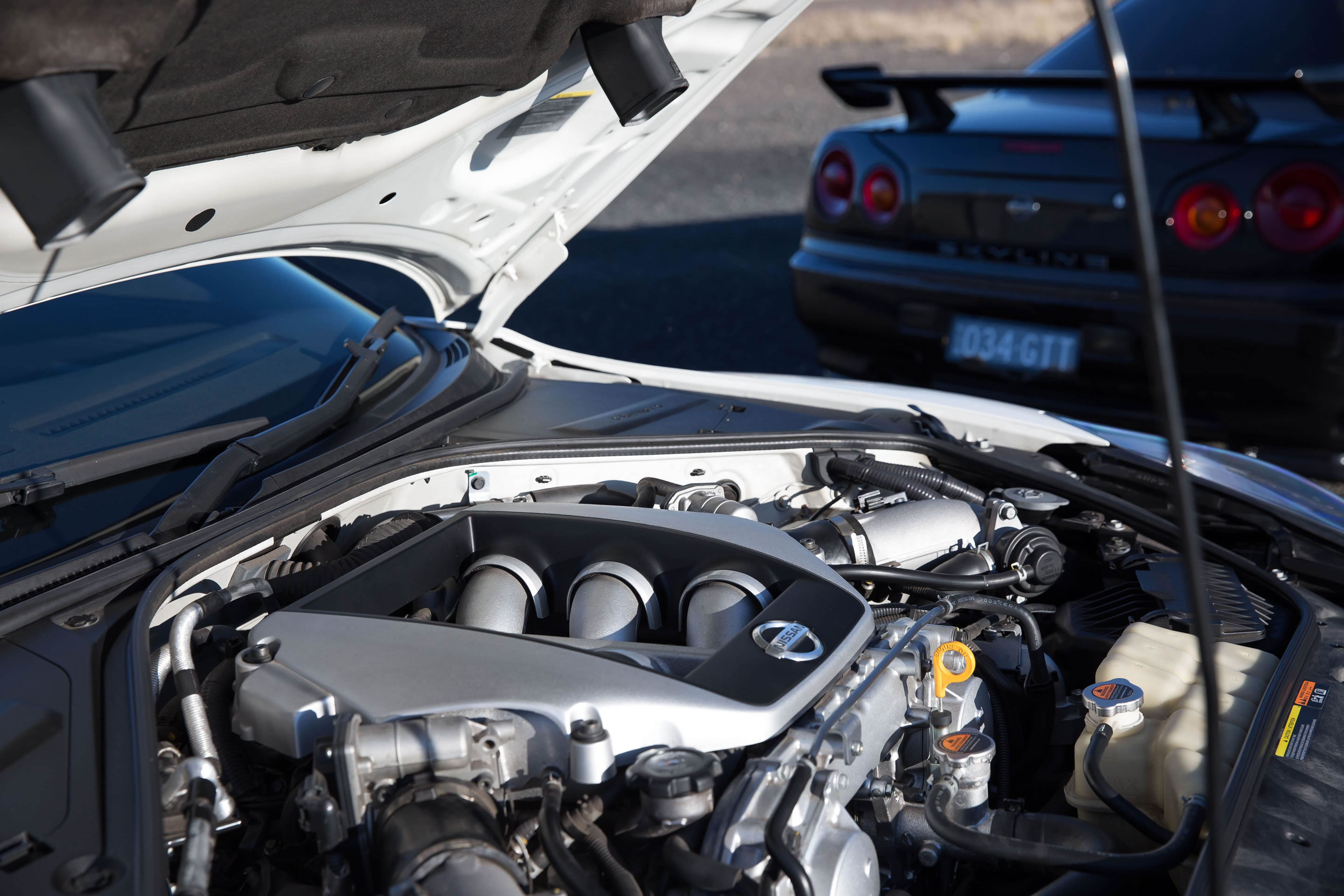 If I were to head to the race track, it probably wouldn't take too long! Powered by the formidable VR38DETT, GTR's have developed a strong reputation for putting down usable, reliable power with minimal modifications. It can put down obscene power numbers whilst still maintaining the drivability it was originally blessed with. 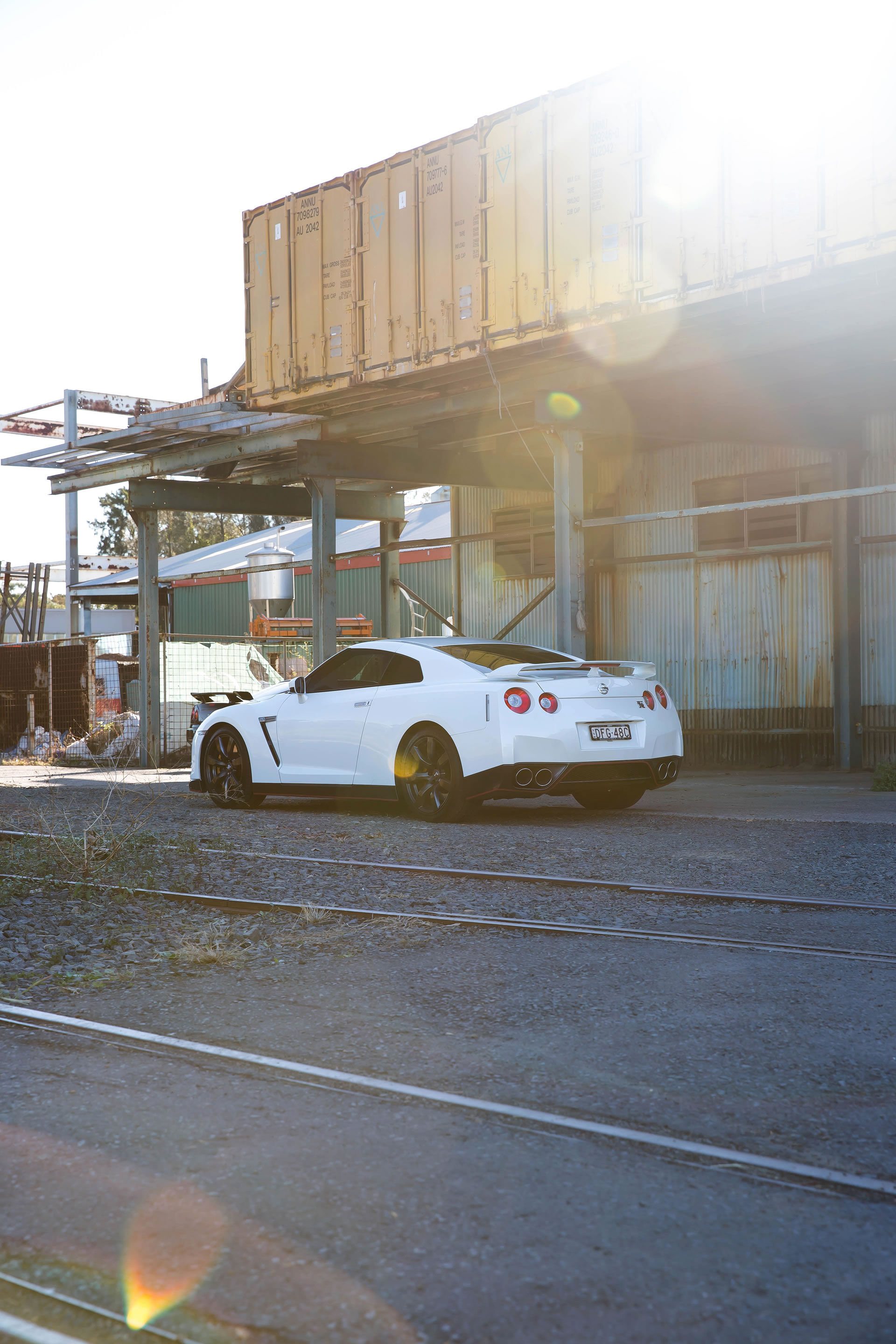 After finishing up the photoshoot with the late afternoon sun glistening as it descended behind the industrial buildings, it was time to head back to the Road and Track HQ.

Only this time I wouldn't have the GTR following me, I would be driving it! 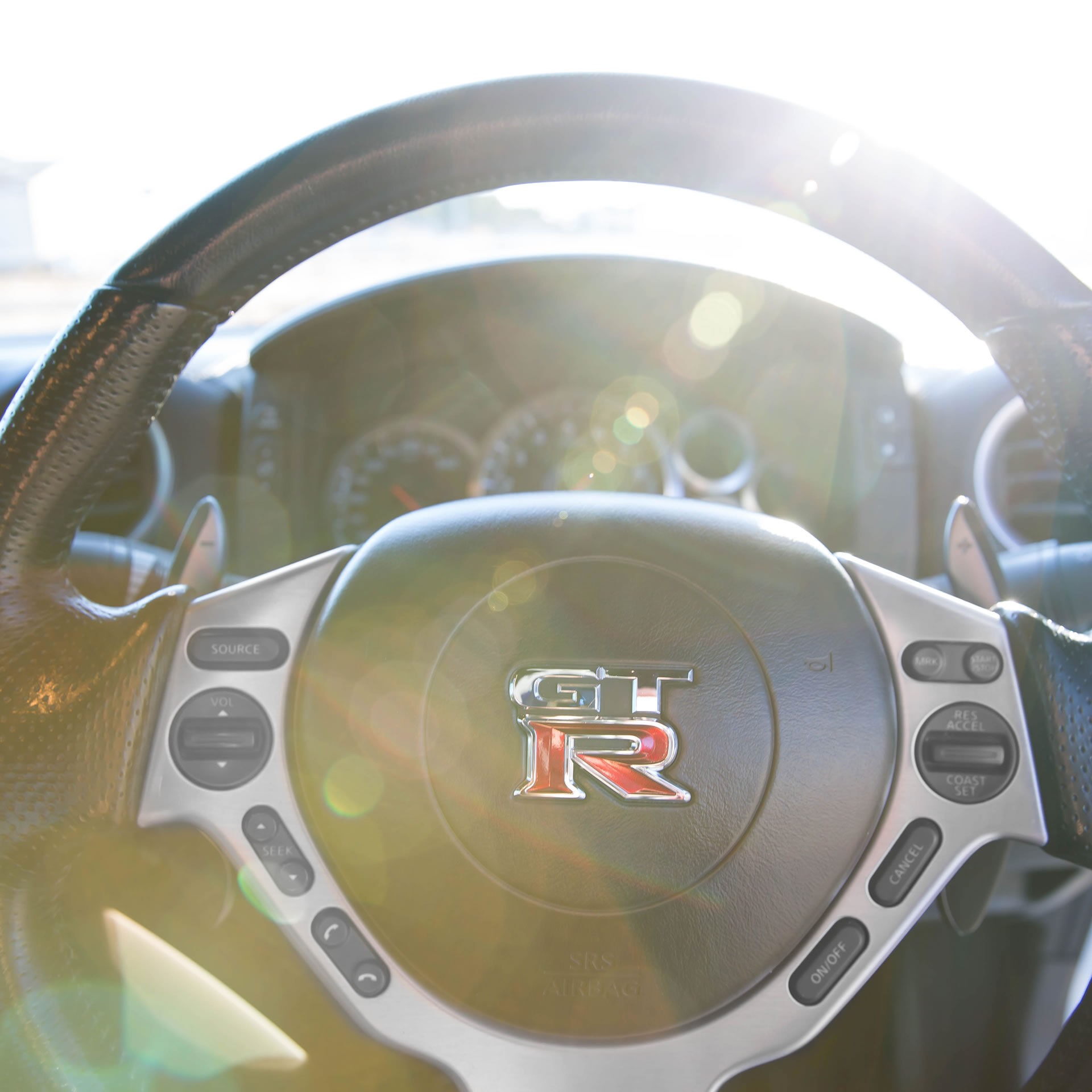 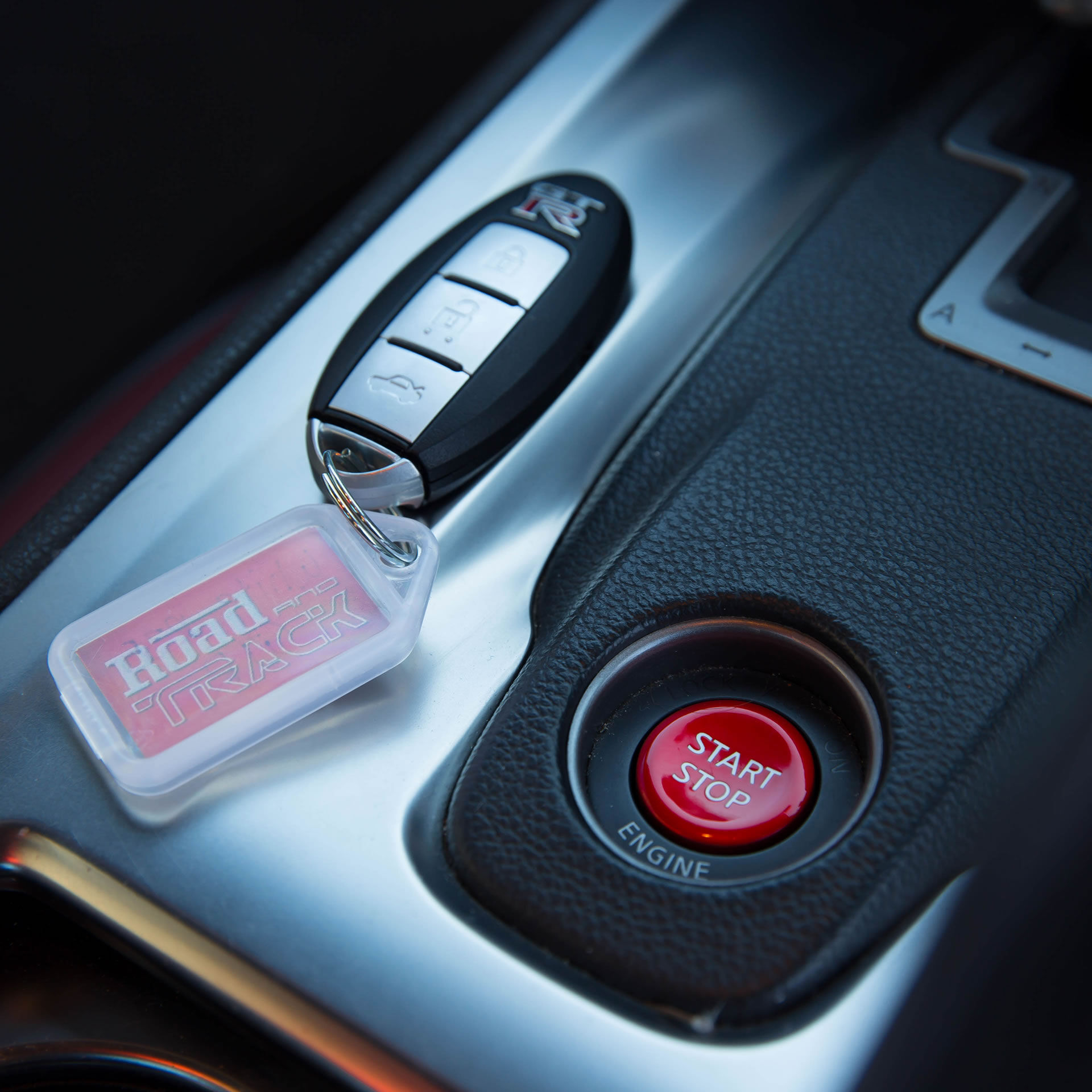 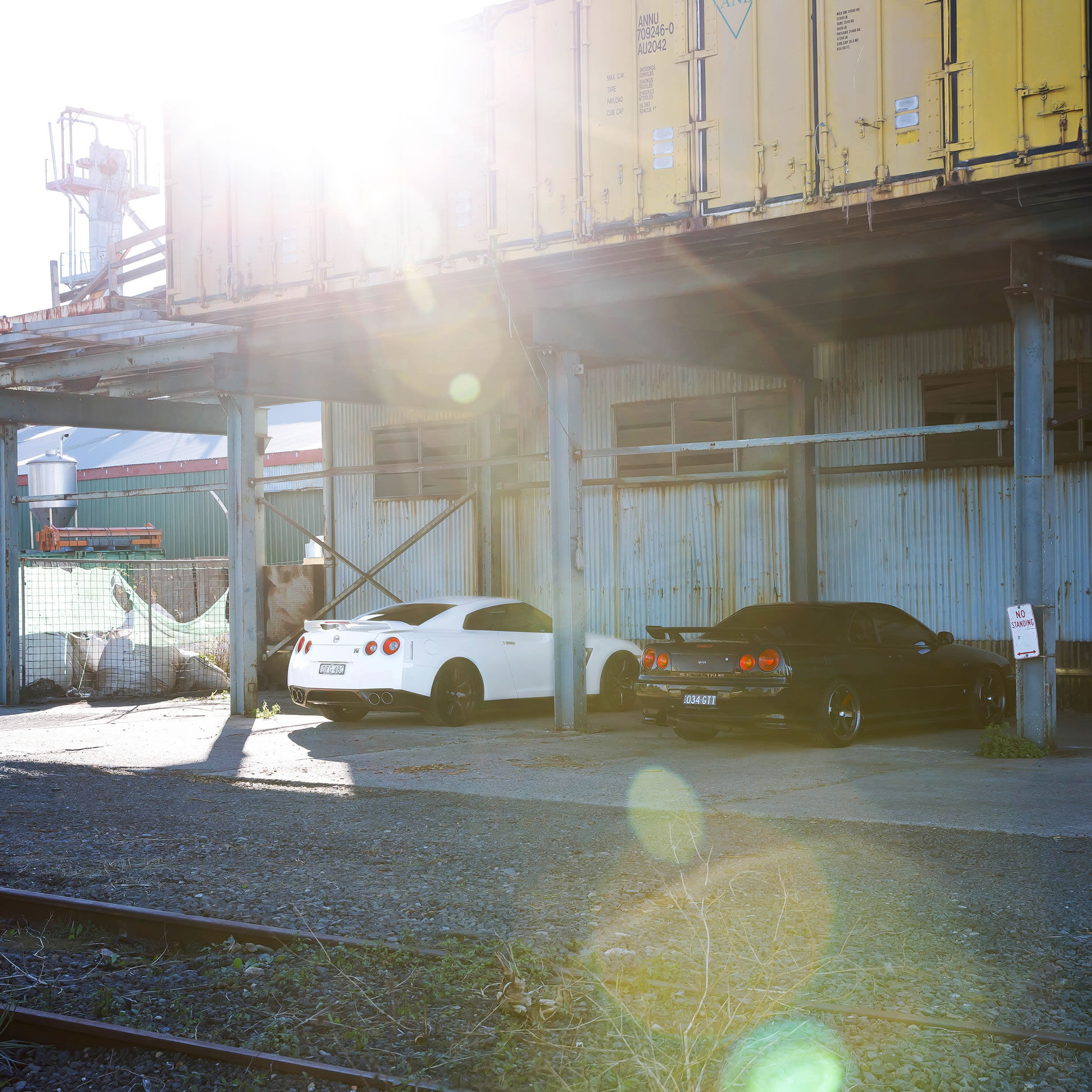 With a stomach full of butterflies and a smile from ear to ear - I pressed the red engine start button for the very first time. Having no time to waste, I fastened my seat belt whilst pinching myself to check if I was dreaming. After realising that this was definitely happening and acknowledging the fact that I was about to drive this beast, I adjusted the mirrors, steering wheel and seat to get myself ready.

As I made myself comfortable, I began to notice just how much bigger this car was compared to mine. The modern essence from the exterior of the car continues throughout the interior with soft leather and fine attention to detail. It’s meant to give a touch of elegance and I think Nissan have really accomplished that. I 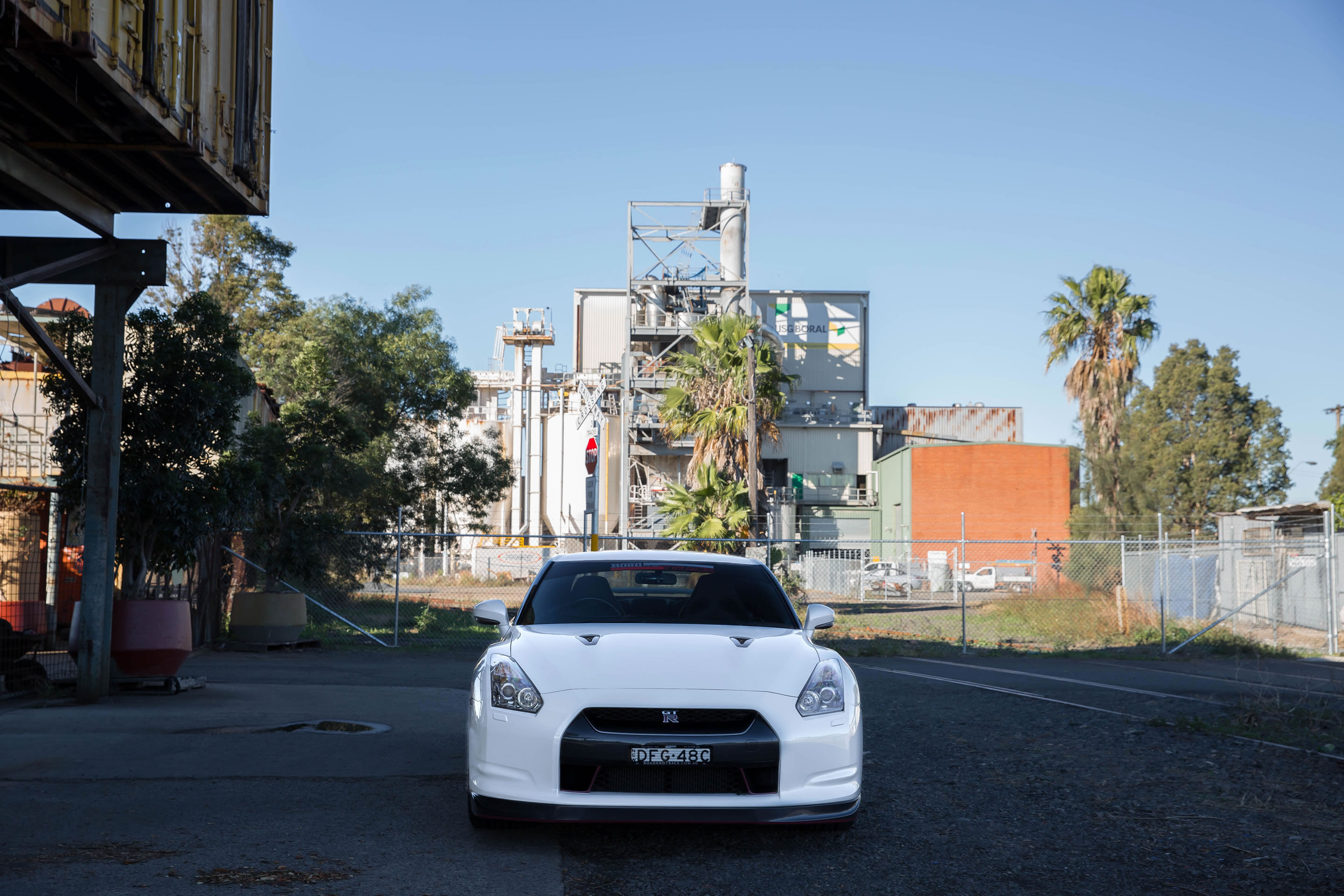 I had driven high performance cars before but never a GTR or a supercar for that matter (although that reminds me I have driven a V8 supercar around Eastern Creek for my birthday a few years ago, which was incredibly exhilarating - I would love to do that again!) As I rolled out of the industrial area whilst following Ross in my R34, I looked down at the GTR emblem pressed into the steering wheel and was instantly reminded at just how much power was at my fingertips. It's not every day that you get to sit in a GTR let alone drive one. 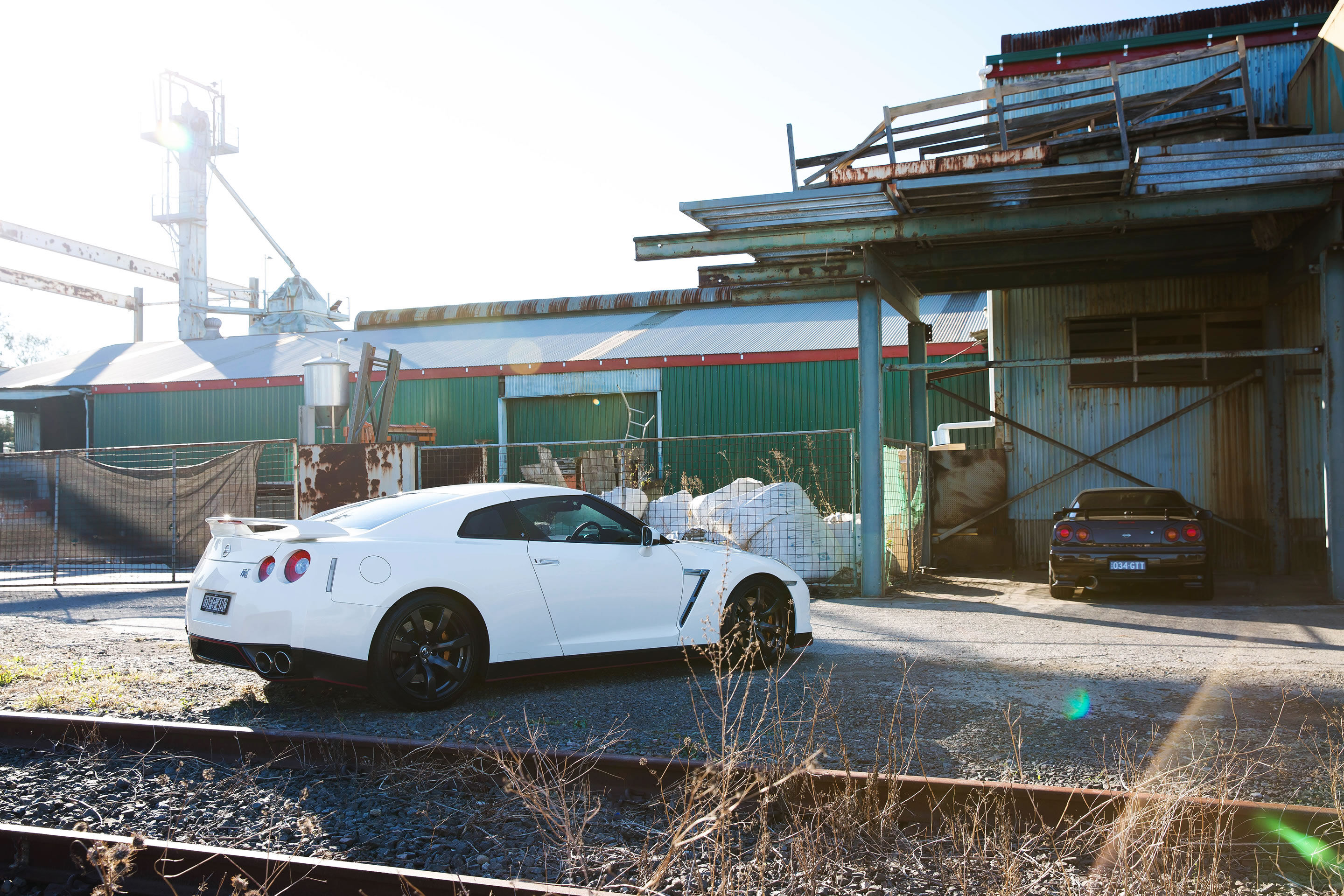 Leading up to the shoot, I had secretly been visualising my R34 as an R35. Each time I would approach a corner through the back streets on the way to work, I would envision myself changing gears with the flappy-paddles. Little did I know that my dreams would soon become reality.

Admittedly the sports transmission took some getting used to, but once I had some time with it, I began feeling a little more comfortable with the paddle shifting, as opposed to using the standard H-pattern stick that I'm used to. 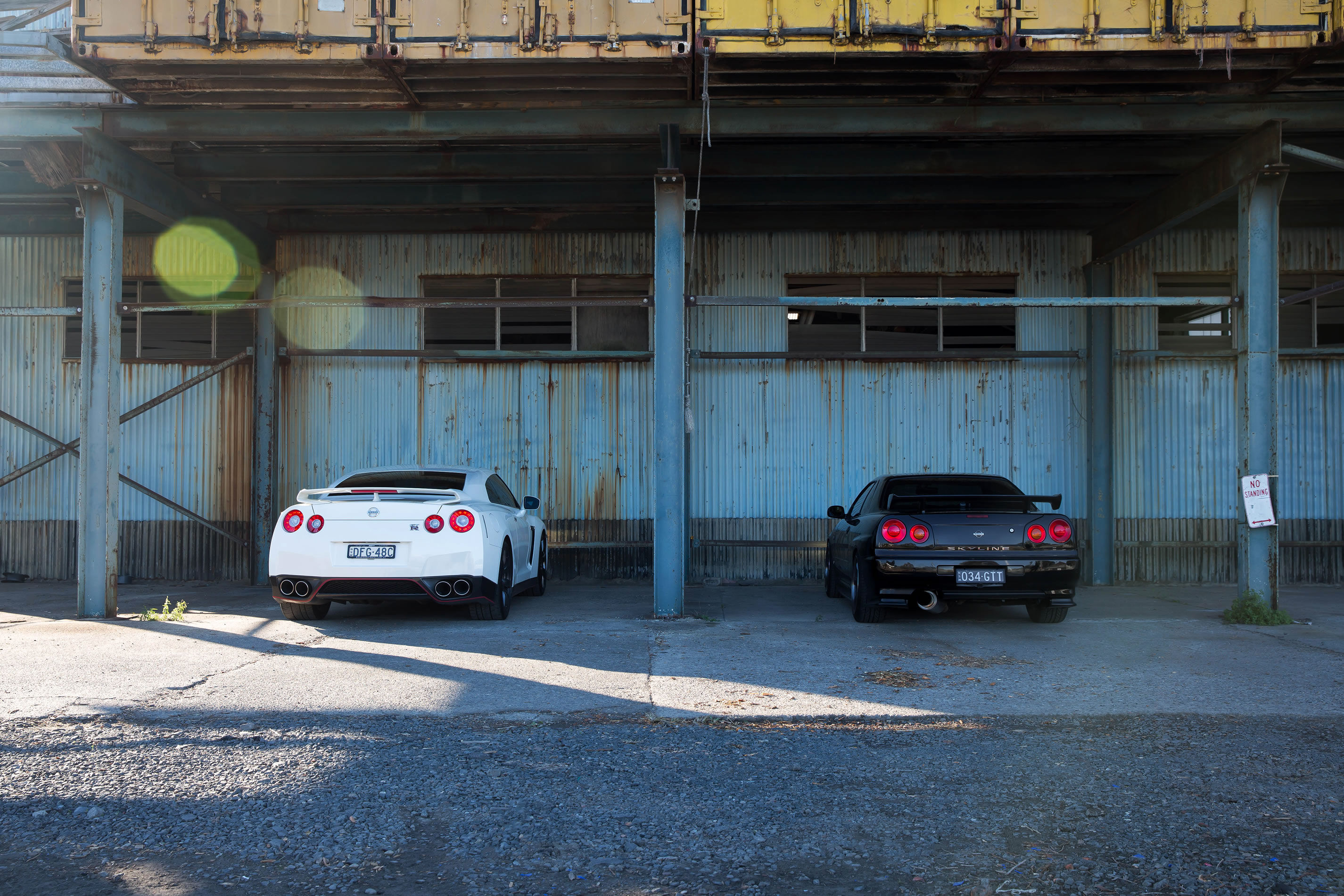 I remember looking down at the modern dash and seeing the relentless surge of the speedometer creeping up and up and having to take a second look as I realised the speedo was almost double to that of my GTT. A huge rush of excitement kicked in as I seemingly buried my foot towards the floor, feeling the brutal acceleration of the twin turbo VR38.

I then find myself bracing my body for the imminent rush of boost and within seconds I was on the tail of my R34. 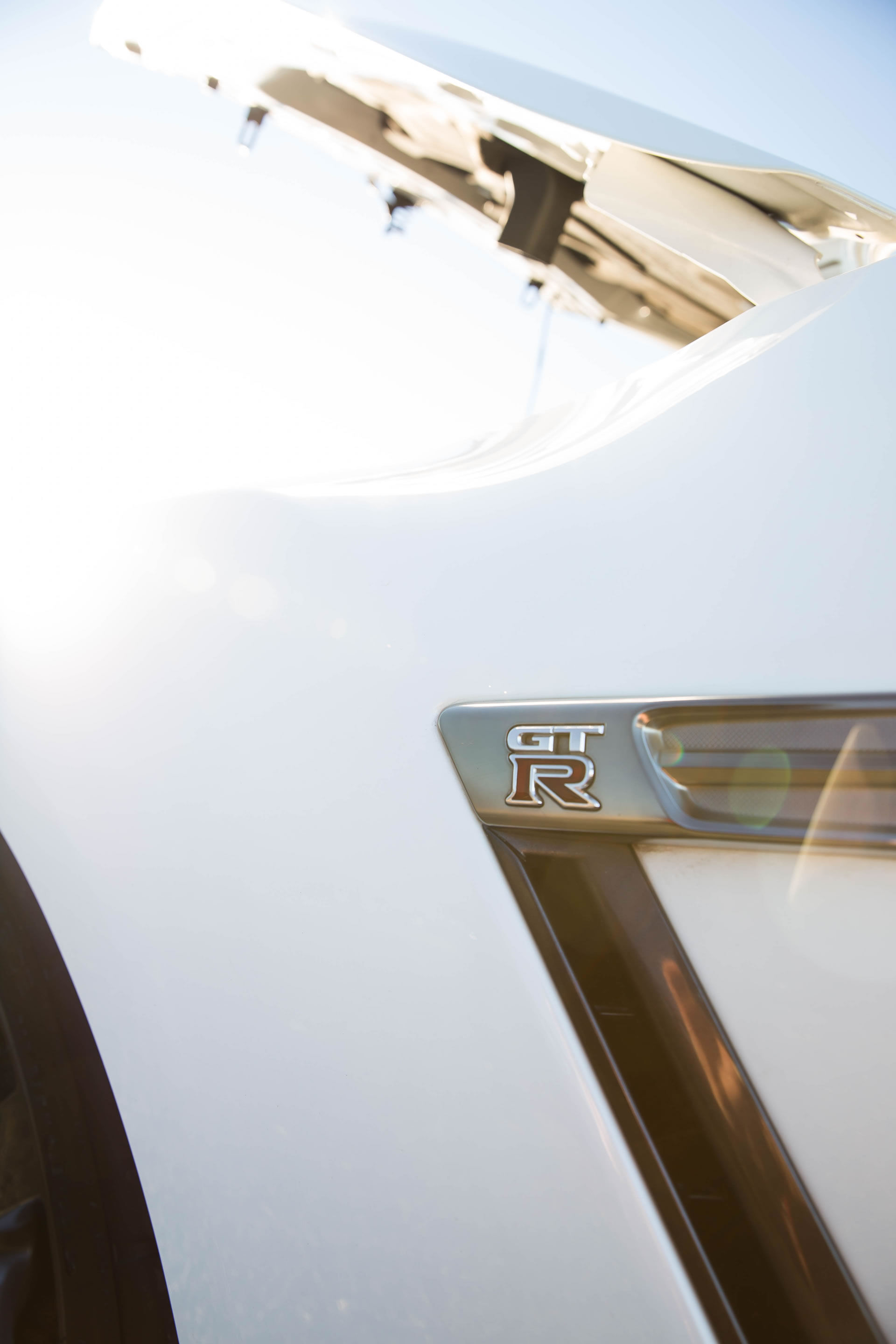 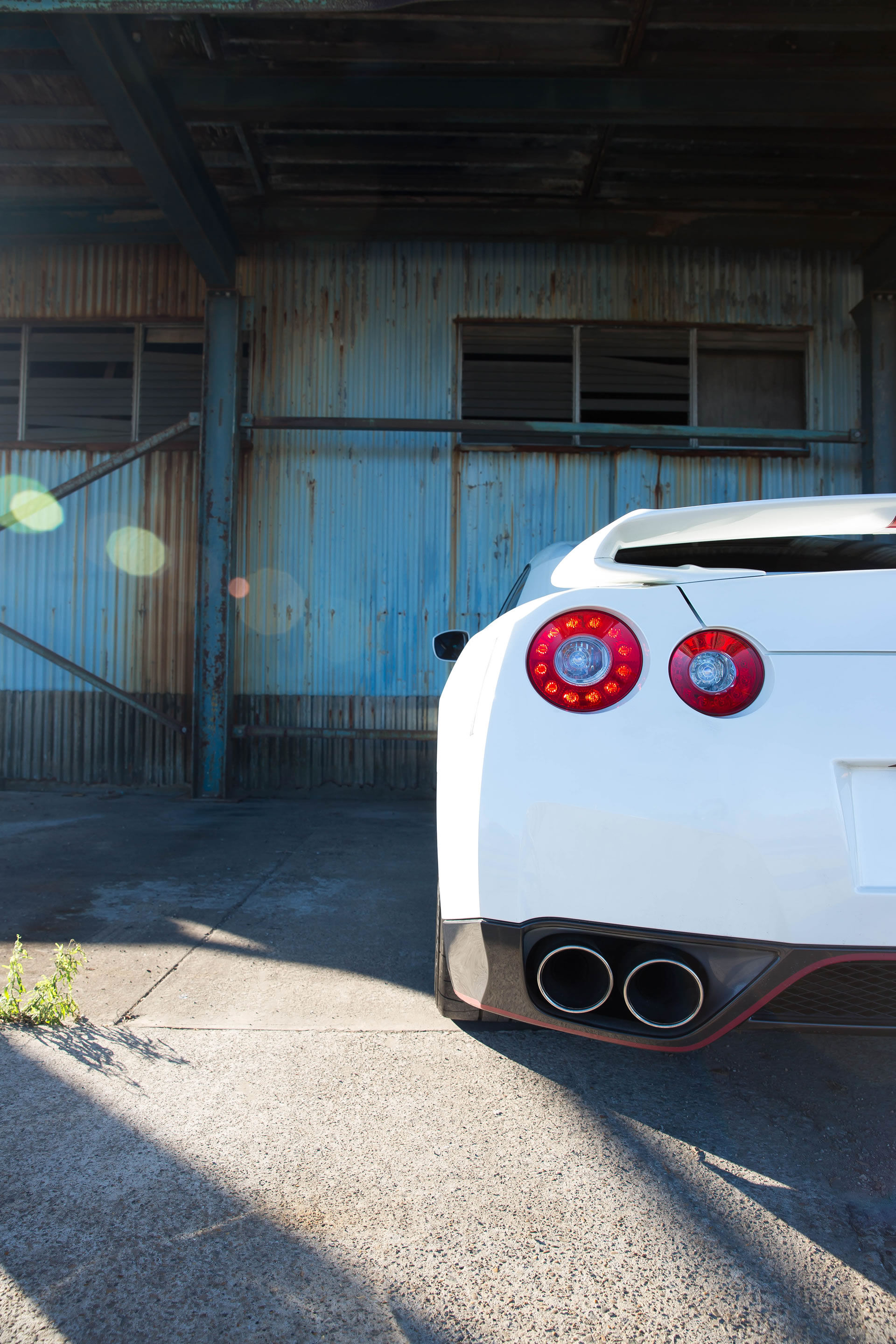 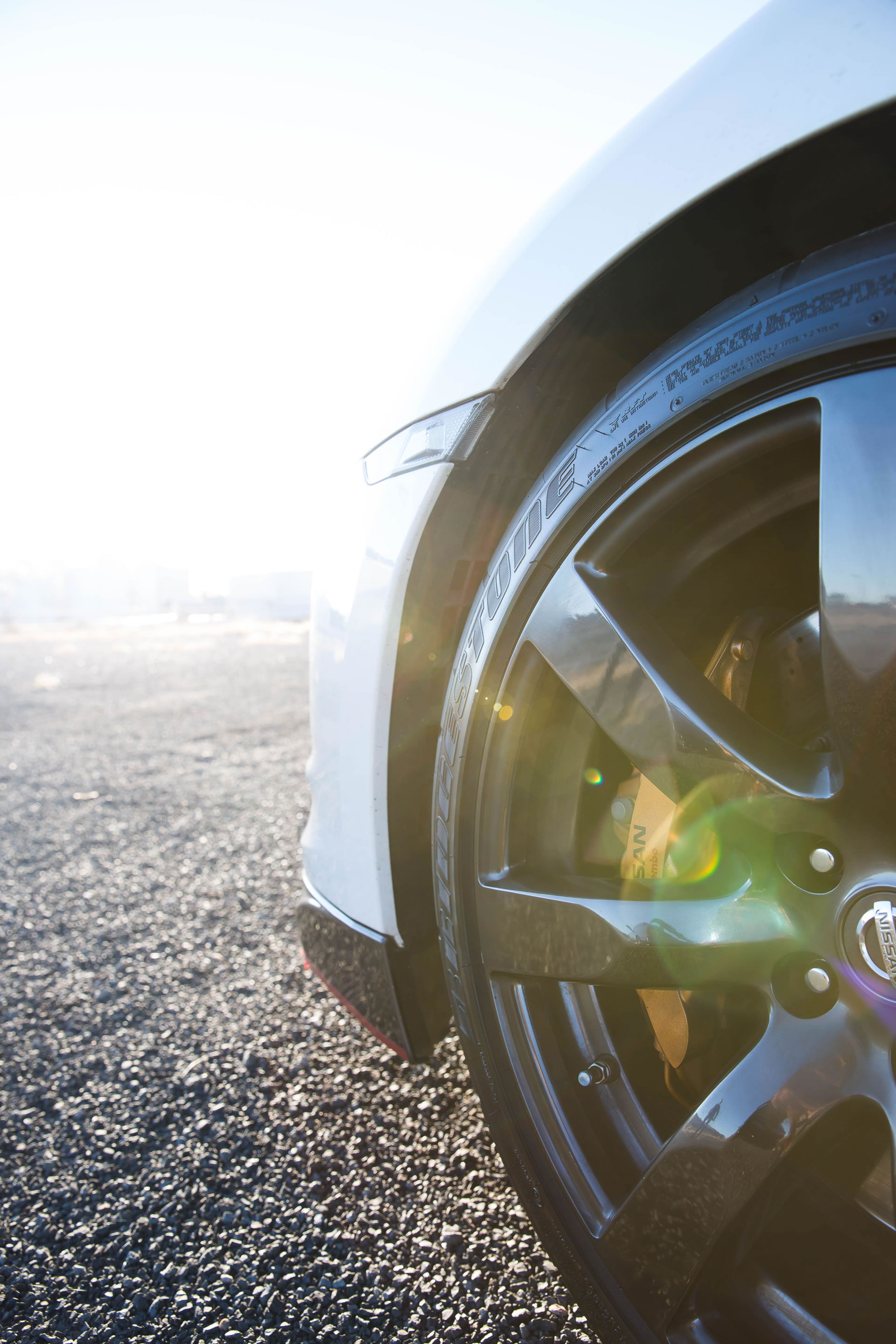 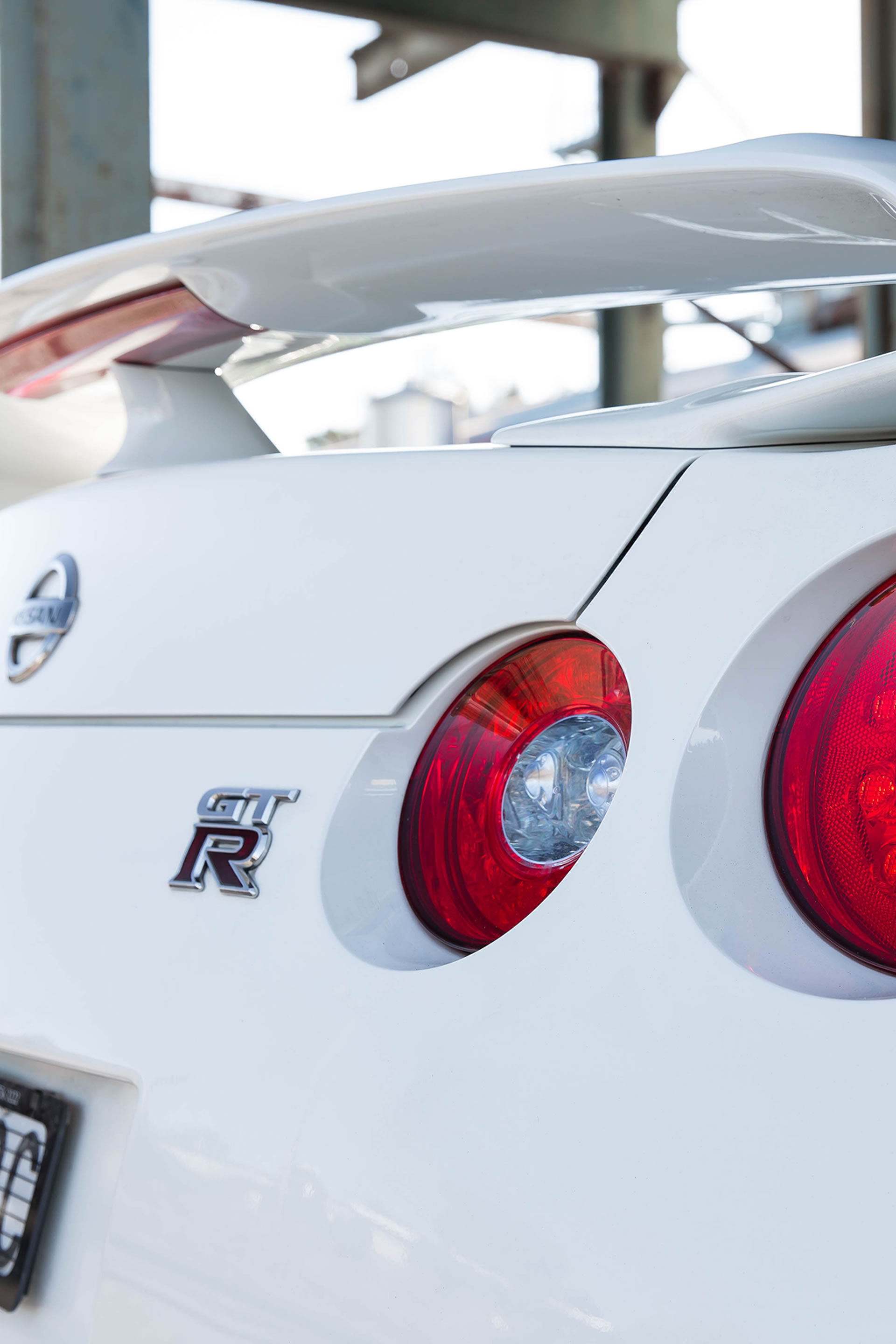 10 minutes of racing through the back streets, we reached the Road and Track HQ. I remember pulling up with the most cheesiest grin upon my face, thinking how this was a moment that would stay with me forever. The entire experience from shooting the car then being able to get behind the wheel exceeded all my expectations.

If only I had chosen a location that was further away so I could get some more driving in!