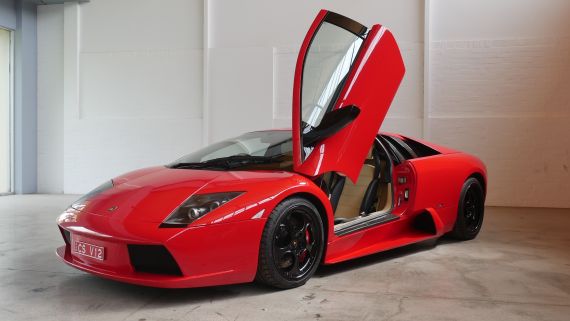 2004 Lamborghini Murciélago
The Murciélago is named after a very famous fighting Bull which in 1879 fought with such passion and spirit that the matador chose to spare its life, a rare honour. The flagship of the Lamborghini range, the Murcielago combines a midmounted V12 Engine with all-wheel drive and an extreme design, exceptionally low and wide body work consisting of mostly carbon fiber and aluminium.
The 6,192 cc (6.2 L; 377.9 cu in) naturally aspirated V12 engine installed in the first generation cars generated a maximum power output of 580 PS (572 hp; 427 kW) at 7,500 rpm and 650 N⋅m (479 lb⋅ft) of torque at 5,400 rpm, accelerating the car from a stand still to 100 km/h (62 mph) in 3.8 seconds and on to a top speed of 330 km/h (205 mph)
Manufactured between 2001-2010, less than 4,000 units were produced most of which featured a newly released E-gear automatic transmission. This particular Murcielago is a rare ‘gated’ manual transmission car. Imported to Australia 2012, the vehicle has had one fastidious owner since arrival and has a full service history. Recently serviced by Lamborghini Sydney, this Murcielago is ready to find its way to a new owner. A very suitable Lamborghini to add to the collection